Miss Kelly began dancing at age 3 with Showtime USA and continued for 15 years until she graduated high school and became a proud Showtime USA alumni. She has a passion for performing and has been seen performing at venues such as Walt Disney World, Busch Gardens, Six Flags, Universal Studios, and The Alabama Theater. After graduating she went to FCCJ where she participated in the dance program and danced for The Barracudas, a minor league hockey team in Jacksonville, Florida. She has taken classes with several choreographers including, NappyTabs, Darrin Henson, Dave Scott, Shandon Kolberg, and John Peters.

She continued to dance through college as well as teaching a long side Miss Pam at Showtime USA. Miss Kelly opened Showtime USA – St. Johns in September 2011 and loves sharing her favorite childhood memories and the “Showtime Experience” with her current students. Miss Kelly comes from a very large and close family whom she loves spending time with as much as possible. She is married to Matthew Williams and they have 2 beautiful children, Ella Kaye and Jacob.

Join us at our Studio 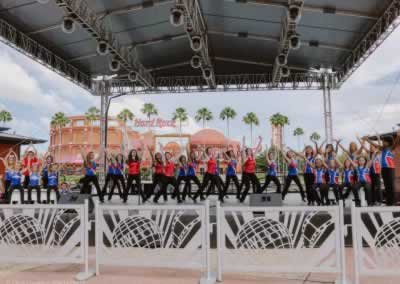